Alexis A. Hunter: You’d see me reclining on my couch, typing away like a madman on my laptop. Headphones are always in, which shuts me off from the world, my cat prowling around the house attacking invisible monsters, and whatever fun video game my husband is playing at the time. There’s the ratta-tat-tat of my fingers on the keyboard – when I get going, I just don’t stop until the end.

AAH: What goes on in my head when I’m writing is still fascinating to me. I get in this strange zone, where I stop seeing the words and instead just see the story playing out in my head. I don’t remember writing the dialogue or the setting or any of that other stuff, my fingers just fly rather mechanically while I play the story like a movie in my head. It’s really rather cool and a little scary.

GFG: Was there anything in particular that inspired “Sharing the Gift”?

AAH: There certainly was. I was in the middle of Story-a-Day May. Much like it sounds, the challenge was to write one piece of short fiction every day in May. Over the course of the month, when not writing, I had started collecting interesting and artistic photos on a Pinterest board.
One piece of art in particular really spoke to me. In swirling, almost wind-swept strokes it depicted two skeletons side by side. They wore clothes; layers of coats and scarves covered their bony chests. And what got me most was that they didn’t appear terrifying. It looked like they were just having a regular conversation.
That of course sparked my imagination about what they were discussing and lead me to write “Sharing the Gift”.

GFG: You’ve managed to make the process of becoming a zombie both terrifying and romantic. What do you envision these characters doing after “the end”?

AAH: I definitely envision them enjoying a break in the wilds for a little bit. They seem to enjoy spending time together alone. But Herb really is adamant about sharing his immortality, so I imagine this decomposing couple will wander back out into the world and well – start chewing on people. Although, really, they started their work with the poor CDC guy.
And after the entire world is converted to their putrefying immortality? I think they’ll go back to the cabin and just enjoy the rest of time with the birds and the fresh mountain air.

AAH: I’m definitely a short story writer, so you probably won’t see any novels out of me anytime soon. Readers can look for my stories upcoming in “At Year’s End”, an anthology from Kazka Press (due to release in early December) and Spark: A Creative Anthology Volume II (due to release next July).
I’d also like to invite readers to stop by my blog. I keep the place pretty well updated on all the latest places to find my fiction and recently finished a series called “The Road to Publication”, full of information and tips for newer authors. 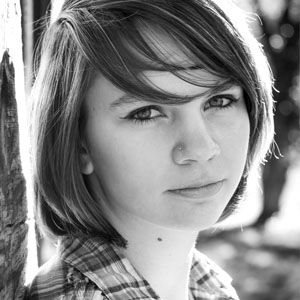 A lifelong fan of speculative fiction, Alexis A. Hunter specializes in all things mythical, ethereal and out of this world. Her work has appeared most recently in The Ghost IS the Machine (a Post Mortem Press anthology), Title Goes Here: Web Edition and Interstellar Fiction. To learn more about Alexis visit www.idreamagain.wordpress.com.