Tory Hoke: Get idea. Kick story around a couple of days. Figure out ending, Write the first draft as quickly as possible, like Stephen King says to. Leave it alone for a week, like Stephen King says to. Come back and make fixes. Put it out on Scribophile. Apply suggestions. Try to sit on it another week, even when I really don’t want to. Make more fixes. Send story to a market. Try not to think about it until it comes back. Try.

GFG: Was there anything in particular that inspired “The Call of Gold Cat”?

TH: A year ago, a very sick old cat showed up in the back yard of my building. I confirmed the cat had no home, and my vet confirmed she was at the end of her life, and we agreed the kindest thing to do was put her down. The sad part wasn’t that it was time for her to die. The sad part was that no one had been there sooner to either help her get better or help her die. People had failed her. Nature had failed her. Why? For what purpose does a loving God allow the innocent to suffer? I sure as hell don’t have an answer. At least now I have a story.

GFG: In your mind, was this part of an ongoing cycle where the cats sought help from those who, in turn, needed their influence or was this something which began with their appearance in the main character’s life?

TH: That’s a great question. In my mind, the cats have been working on this problem for a long time, trying to find ways to die with dignity. But they’re sick of it. They deserve better. So when Tuxedo Cat gambles on Ron, the rest take notice.

GFG: When you write short fiction, do you tend to start out with a fully formed idea or with bits and pieces that you then flesh out?

TH: The former is more efficient for me. When I’m writing, I go snowblind to the plot—the cause and effect, the who-wants-what-and-why—so hammering the plot out first means weeks of rewrites instead of months or years. I once trunked a “finished” fantasy novel because I realized I didn’t satisfactorily answer “why do the heroes want to take the macguffin there?” So I try to write down some kind of Pixar Rule #4 overview before I get going. Try.

TH: I draw and heckle movies at thetoryparty.com. My Rare Words vocabulary comic updates weekdays on vocabularycomics.tumblr.com and Twitter @toryhoke. This summer Luna Station Quarterly launched a new blog with a trove of women-emphasis non-fiction, including my “Chick on the Draw” column on first Fridays. 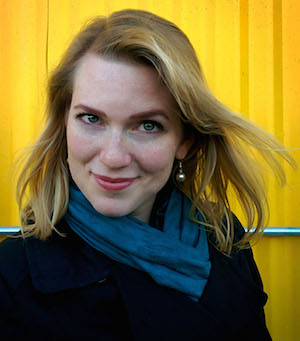 Tory Hoke writes, draws, and sweats in Los Angeles. Her stories have appeared in Strange Horizons, LORE, and Three-Lobed Burning Eye, and she has illustrated for Strange Horizons, Apex, and Eggplant Literary Productions’ Spellbound anthology. Her Rare Words vocabulary comic updates weekdays at thetoryparty.com and on Twitter @toryhoke. “The Call of Gold Cat” was inspired by true events.

The Call of Gold Cat

Of all the houses on the block, they had to stop in front of his. Don Marietta glared through the blinds at the women on his sidewalk–moms in North Face jackets comparing strollers. His unlit Camel Light bounced a polka on his lip…

It becomes a sort of test, to give each new girl the red shoes.
Some, already inclined to treat any act of kindness with suspicious, look at the shoes, stroke them gently (they are so fine, so soft, so red), before handing them back with a smile or snarl or a fist…