Goldfish Grimm: Mari Ness is a returning author to Goldfish Grimm. Her story A Winter’s Love originally appeared in issue 13. Mari, what sort of interesting things have changed or happened in your world since we last saw you in Goldfish Grimm?

Mari Ness: Apart from painting a small wooden house for owls to roost in, pulling out my harp again to practice a little, and learning to tolerate the two overly cheerful blue jays that have decided to take up residence in the yard, honestly, not all that much. Which is a strange feeling: most of my life has been filled with endless change and things happening, and I haven’t quite gotten used to a life of quiet yet.
As I type this though, more exciting things are coming up. I’ll be heading out to Loncon – Worldcon in London in a few weeks, and trying, for the first time, to negotiate London via wheelchair, which – the wheelchair part – looks like it will be providing plenty of excitement. I’ll be doing some other travel in the UK and Ireland as well. Later in the year I’ll be heading up to World Fantasy in DC. And I might start to try to learn Irish Gaelic.

GFG: Was there anything in particular that inspired “Survival”?

MS: “Survival” is very loosely based on Hans Christian Anderson’s “The Red Shoes,” although it goes in a different direction, and except for the shoes, has entirely different characters, and no angels. It forms a part of my still in progress series of flash fairy tales, based on a fairly arbitrary list of 200 fairy tales from Grimm, Anderson and various Italian sources.
The original tale, one of my least favorites as a child, is a cruel story of temptation, deception and vanity. Some elements of that crept into my version.

GFG: What type of symbolism does the pair of red shoes in this story represent to you?

MS: I’m tempted to say “medical tests,” since looking back on the story, and when it was written, I have a feeling some of that was in the back of my mind: going through an endless dance of medical tests/billing while others seemingly just go on with their lives.
Since I didn’t actually notice this until now, however, I can’t say that was at the front of my mind. I think I more had the idea of false promises and gifts, and what can happen when you are desperate.

GFG: When you write short fiction, do you tend to start out with a fully formed idea or with bits and pieces that you then flesh out?

MS: I’ve just recently released a reprint of one of my more praised, but difficult to find stories, “Twittering the Stars,” through Upper Rubber Boot Press – something I’m delighted to have available again. It’s a hard science fiction story told entirely in tweets that can be read backwards or forwards; I remain very fond of it.
Other short stories and poems and a novella are coming up soon: probably the best thing to do is follow me on my official blog, marikness.wordpress.com, or on Twitter at mari_ness. 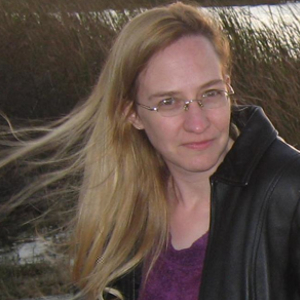 Mari Ness is only slightly less obsessed with fairy tales than her work would suggest. Her fiction and poetry have appeared in such places as Tor.com, Clarkesworld, Daily Science Fiction, Apex, Strange Horizons and Goblin Fruit.  For a longer list of works, check out her official blog at marikness.wordpress.com, or follow her on Twitter at mari_ness. She lives in central Florida.

It becomes a sort of test, to give each new girl the red shoes.
Some, already inclined to treat any act of kindness with suspicious, look at the shoes, stroke them gently (they are so fine, so soft, so red), before handing them back with a smile or snarl or a fist…

The Call of Gold Cat

Of all the houses on the block, they had to stop in front of his. Don Marietta glared through the blinds at the women on his sidewalk–moms in North Face jackets comparing strollers. His unlit Camel Light bounced a polka on his lip…