Peddling is hard. Murray has to trundle the umbrellas past the altar, trying to ignore the stench of half-burnt flesh, without breaking his cartwheels in the cracked earth. He must shove away the urchins, dirtier than usual because the drought’s on, while staging his area.

This is the last corner of the country which worships Imdugud, that unreliable god of rain. Murray posts his umbrella house within sight of the altar. The offerings there give it the semblance of a burnt down factory: furniture springs, chair legs, the odd cow. Despite the clear sky, Murray erects a sign that reads, “Prepare for the deluge.” His umbrellas feature a single chamber, each taller than a seated man. When lifted, the skirts unfurl with subdued majesty.

As Murray arranges the domes, heavy with tassels, adorned with weathervanes and awnings, a crowd gathers. These are withered, scaly people. Some of them chuckle, others stare in disbelief. A few offer up advice. “Save your time,” they say. “Frogs will fall out of the sky before rain does.”

“These aren’t ordinary umbrellas,” Murray says, plucking a small boy off the cart and holding him out at arm’s length for his mother to retrieve. With a flourish, he unlocks the telescoping mechanism of a harlequin model and up flies the shade; the wind chimes swing out with gratifying violence. “Only the hardest droughts demand such indulgence, and who among you doesn’t deserve such luxury? Each hand-sewn, each unique.” Inside, they boast oil paintings, pillows and rugs, vents for candle smoke. “Roomy for two, cozy for three. With this, a family can walk in the weather without fear, deluge or drizzle, and carry all the comforts of home. Behold! Utopia with a handle.”

He demonstrates how to navigate while wearing the houses, shows the windows hidden under the flies. The people try them, bump into each other with playful apologies. A cross-eyed man fusses one shut. “We’ve got prescription-strength windshields,” Murray says and slides another one open. The man smiles but a scowling farmer scoops him out of the way.

“Put these away,” he says. “He’s come to mock us. We prayed to Imdugud. We sacrificed three percent of everything. Still, no rain. Imdugud doesn’t care.”

Murray watches the umbrellas collapse with the townspeople’s enthusiasm. So far, he’d seen sacrifice only in desperation, a fine line between faith and etiquette.

“You’ve come to throw salt in our wounds,” someone shouts from the back of the crowd.

“We can’t know the gods’ ways,” Murray says. “Perhaps the umbrellas will precipitate the rain.”

“The ones over the horizon.”

“Why did you burn your offerings if you have no faith? Is Imdugud testing your sincerity?” Murray asks as they drift away. Two of the boys throw pebbles at his umbrellas. “If five of you bought umbrellas, it would be a powerful gesture. Three even. Show your faith.” They retire to their dusty houses, doors agape like dark mouths. “Anyone?” Murray calls. The cross-eyed man reaches into his pocket, but the farmer stops him.

After the last one leaves, Murray kneels at the altar, traces a zero into the ash.

Peddling is the toughest test of a man’s character. Like the gods, he’s hard-pressed to keep an audience. On his way out of town, he sees a fringe of gray and opens his umbrella. It has sachets of incense inside, and pockets for goodies redolent of lemon drops.

He reaches into the attic for his pipe and glimpses undulating roads like parched tongues lolled out to the horizon. He chooses one and walks on as the rain starts. It falls in stones, in frogs, in salt. And near Murray’s feet, a single gold brick. 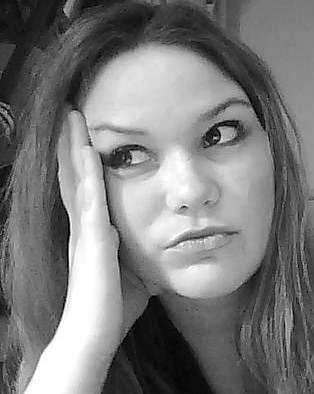 Marcelina Vizcarra lives in the Midwest where she raises people, paints, and loses an average of two umbrellas per year.  Other work has appeared or is forthcoming in The Colored Lens, Word Riot, and Vine Leaves Literary Journal.

Utopia with a Handle

Peddling is hard. Murray has to trundle the umbrellas past the altar, trying to ignore the stench of half-burnt flesh, without breaking his cartwheels in the cracked earth. He must shove away the urchins, dirtier than usual because the drought’s on, while staging his area…

I wish I could say, one day I went to bed and everything was normal, and when I woke up it was different. Like this. The air here is thin, the earth lifeless; even the clouds are dead. Everything is grey, starlight and sunlight and moonlight and my skin…