Borobor lived alone in a taupe mini-McMansion with all-over carpeting. His two and a half bathrooms had white tile, white sinks, and white toilets to assist resale. The kitchen boasted granite countertops and stainless steel appliances, the pride and joy of Borobor’s realtor; and they all (except the realtor) stared accusingly at Borobor each evening as he hovered, making dinner of bland foods that in no way, shape, or form resembled an onion. A rye roll and a herring were, of course, out of question under the circumstances.

In fact, he’d been making one of those listless dinners when someone knocked on the door. Who could it be? A car salesman, he thought, one of those who sell green, which is to say photosynthetic, vehicles that shrink at night and need to be revived by water.

He opened the door, grumbling about wilted models that do not transition well from the hothouse to the suburban home. The person outside was a car salesman indeed–none other than Uncle Willard, deceased since last summer and only slightly worse for wear.

“Ohoho, my boy!” exclaimed Willard, inhaling blissfully. “I see that not even my early grave would keep you away from family traditions!” He nodded in the general direction of Borobor’s right hand, which tightly clutched what appeared to be a raw onion, half-peeled and oozing sweet juice.

Borobor could distinctly remember that he worked in insurance and drove a silver Toyota Camry to work. He had no uncle called Willard or any uncle at all, nor indeed could cars (Toyotas or otherwise) shrink under water. Borobor’s hand was for all intents and purposes empty, the shelves of his stainless and spotless fridge entirely lacking an onion.

On the other hand, he’d missed Uncle Willard rather a lot.

Soon the uncle was seated in the kitchen and equipped with an onion to peel and a small watering can. There he sat, alternating between bites, sneezes, crying, and surreptitiously watering a car the size of a thumbnail. Borobor shuffled off to prepare one of the two guestrooms for Willard (finally a use!), but found that it had been replaced by a wall of shelves festooned with rows upon rows of onion jelly. Two of the bathrooms were gone as well. The remaining one acquired a purple everything, including the tub, toilet, sink, towels, and the famous portrait of Aunt Pruria as a young man.

When Borobor returned to the kitchen, Aunt Pruria was already there, mixing cut onions with sugar in a big copper jam bowl Borobor had never had, and chattering excitedly to her brother. Pruria’s hair seemed no less purple than the year she dyed.

“Right-ee-oo,” she said, nodding approvingly at Borobor, “I knew this wife of yours would be no good, her sniffling at garlic and onion jams the way she did.”

Borobor realized that he’d always lived in a two-bedroom apartment in a high-rise. He’d also had a wife, who’d run off to participate in mountain-scaling competitions about a year before Aunt Pruria had died of chopped liver, which (the runaway, not the aunt) provided ample gossip to neighbors now conveniently living above, below, and from the sides. Of his previous life Borobor remembered only a beige sofa scotch-guarded against stains, and a white dish with something bland which definitely wasn’t herring, roll, or onion. None of this was real, except perhaps the onion, a family tradition, Uncle Willard had said.

Borobor went to the pantry to pour himself the requisite 100 grams of vodka. The cat was already there and scratching an old Formica counter. By the cat, the white dish contained the roll & the onion, but unfortunately only the smell of the herring due to its former proximity to the cat. Borobor now remembered that it was the cat’s untimely death that had prevented him from continuing to write recursive stories about cats, for which he’d once been pre-selected for a major award in the field of science fiction and fantasy.

Absent-mindedly petting one hand with the cat and opening a can of tuna with another, Borobor proceeded to the living room. Mother and Father had arrived, fresh and chirpy as if the car Uncle Willard had sold them at a family discount hadn’t shrunk suddenly during rush hour. The door to the second guest bedroom had disappeared.

Borobor remembered wandering from room to echoing room, speechless with weird heaviness under his heart and with nary an onion in sight. He thought of going upstairs to check on his one remaining bedroom, but father was already in the kitchen and frying onions in a cast-iron pan, and mother was peeling potatoes. Grandpa and grandma returned shortly after, he with a pack of filterless cigarettes (onion-flavored) and she with a vaguely onion-shaped street sign in some forgotten language, an heirloom which had been carried away with grandma in a tornado.

It was getting a bit tight in the kitchen, though a few people fit on top of Uncle Willard’s newly watered car (nobody quite dared to go inside it), and when Grand-aunt Fro arrived with her tuba, the gnawing under Borobor’s heart suddenly stopped. They ate and drank and exchanged learned opinions about horticulture and sang and trumpeted and miaowed while onions sizzled on the stove.

In the apartment’s only room, the kitchen, they waited for the children to arrive. 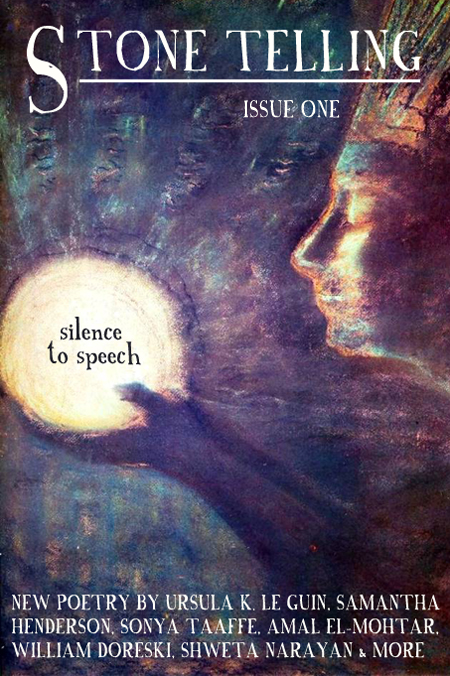 Rose Lemberg was born in Ukraine, and lived in subarctic Russia and Israel before immigrating to the US, where she works as a professor of Nostalgic and Marginal Studies. Her prose and poetry have appeared in Strange Horizons, Apex, Beneath Ceaseless Skies, Unlikely Story, Daily Science Fiction, and other venues. She edits Stone Telling with Shweta Narayan. Rose has also edited two anthologies: Here, We Cross, a collection of queer and genderfluid poetry from Stone Telling (Stone Bird Press, 2012) and The Moment of Change, an anthology of feminist speculative poetry (Aqueduct Press (2012). Rose can be found at roselemberg.net, her Livejournal blog, and on twitter as @roselemberg

No Longer Lacking an Onion

Borobor lived alone in a taupe mini-McMansion with all-over carpeting. His two and a half bathrooms had white tile, white sinks, and white toilets to assist resale…

People say that the asteroid that destroyed 47 Piscium was set in motion by a passing star. That it was a handful of dust coalesced into rock, with a bare nothing of a molten core, minding its own business out on the far reaches of traversed space…