She was taller than most ladies and therefore better able to carry an ax at her side without it brushing the ground.

She carried the ax everywhere, even to places where there was no need for an ax. To the marketplace. To town festivals. Even to the temple. It nestled alongside her gown quite conspicuously, its handle smooth and well worn, its flat head two-sided and broad, its edges sharp. So sharp it gleamed as she walked by.

The townspeople gave her a wide berth, even though she was never known to use the ax to harm anyone. It would have been the same if she had long pointed teeth. The mere thought of what the ax could do was enough to garner her much respect. And most of that respect was born out of fear. And that set the lady apart from the rest.

Other ladies eyed her with horror. Children ran when they saw her approaching. And not a single respectable man attempted to talk to her. The only men bold enough to stand before her, within reach, were men on the receiving end of a bet or men too drunk to realize what they had stumbled into. She could have cut them down, hacked them into halves and quarters before anyone could have stopped her, but she simply stood her ground and allowed the silence of her stare and the gleam of her ax to turn them away.

Until one day, when a man with wings walked into town.

The man had wings that were soft and white, and quite feminine for a man to possess. He kept the wings tight against his back, but their round feathery elbows jutted above his shoulders like the collar of an ivory cape. He had traveled to many towns and this town was just one stop along the way. He too was set apart from the rest, for carrying wings, no matter how light, were a heavy burden to bear. Wherever he went, people expected him to fly, but he couldn’t. The wings, as far as he knew, were mere decorations, and this brought much disappointment and no friends at all. Who would befriend a man with wings who couldn’t fly?

“It takes a sharp nose to select the proper rutabaga,” he said.

The Lady with an Ax turned to him, one long-fingered hand wrapped around a plump purple-bottomed rutabaga, the other wrapped around the handle of her ax. She eyed the jut of his wings and suppressed a smile.

“It takes a light-hearted man to admit his knowledge of rutabagas,” she replied.

“I also know the mysteries of tea,” he said. “I have collected many varieties in my travels.” He gave the satchel slung around his neck a prideful pat. “I would very much like to share those mysteries with you, and more, if you have the time.”

The lady stared at him. His eyes were of the purest blue. His smile was short on length but long on character. She felt the grip of her ax slip with unexpected perspiration. “Will tea be involved?”

“Of course. And rutabagas?” he asked.

“I’m sure I can fix something up,” she said.

So the Lady with an Ax invited the Man with Wings back to her cottage, which was far from town, deep in the surrounding forest. It was a long walk. Along the way, the lady couldn’t help but inquire, “Have you always had wings?” To which the man replied, “Have you always carried an ax?” Neither saw reason to explain their origins to the other, and both understood why. They talked about their fancies instead. The lady fancied birdhouses; she built them from carefully selected strips of tree bark. As mentioned, the man fancied teas, and flitting from one town to another in pursuit of his dream.

“And what would that dream be?” asked the lady.

“To put these useless things to good use,” he said, raising the peaks of his feathered appendages even higher. “And yours?”

“My dreams are all horrible. They are not worth telling.”

The lady lived in a modest cottage. Wood smoke curled from a chimney flue. Birdhouses hung from every tree limb within reach. No two birdhouses were alike. And yet the surrounding woods were silent.

The man looked about. “Where are all the birds?”

“They land but they never stay,” she said. “Perhaps with so many trees around they have no need for one of my houses.”

“Well, they are all quite special,” he told her, admiring their craftsmanship.

The lady set about making a most delectable stew using the items she had purchased at the market. The man opened his satchel and, after sniffing each and every pouch, found the perfect tea to complement the meal. Together they sat and ate and drank. And afterwards, because it had been so long since each had been in the company of the opposite sex, their loneliness surfaced and drew them together in an awkward embrace. The feathered folds of the man’s wings were cumbersome, and the heavy ax and its razor sharp blade that never left the lady’s side was a challenge to avoid, but sometimes loneliness withstood great hardship to satisfy its hunger. As did love.

In the morning, the man woke first. Used to bedding down in all manner of odd places, mostly outdoors, he was accustomed to rising with the morning sun. For a moment, he lingered in the large oaken bed, his wings matted beneath him. The lady’s feather down mattress was the most comfortable he had ever slept on. The lady lay beside him, still peaceful in her horrible dreams. He took caution not to wake her as he rose, already thinking about what kind of morning tea would best impress her.

To his surprise her ax leaned against the wall beside the bed. Carrying around such a heavy instrument must be a burden, he thought. He had traveled all over the land and had seen many a lonesome individual overcome the instrument of their loneliness. In fact, he had helped quite a few.

Very quietly, he lifted the ax from its place and carried it outside, hiding it behind one of the nearby trees. When he came back into the house she was waiting for him.

“Where is it?” she asked. She was not the same person. She appeared frail. Her body trembled. She listed to one side.

“After last night, I had hoped you would no longer need it.”

“I had hoped I could be a part of you instead.”

She pushed past him furious. The ax wasn’t hard to find. The morning dew had left the man’s footprints on the ground. She returned with the ax in her hand and, as the man stood making tea for the two of them, a soothing tea to temper her anger, she swung the ax and the man’s wings fell to the floor.

At first, the man was shocked that she would do such a thing. But then a pleasing calm overcame him. There was very little blood. Some teas were also good to use as a healing poultice, so he immediately searched his satchel for the correct one.

“Maybe now you understand how important this ax is to me,” she said. Her frailty had passed. The trembling had stopped. She was once again in command of herself. Her voice softened. “Does it hurt?”

Applying the poultice posed difficult for the man. The lady momentarily put her ax aside to help him. Her touch was both deft and delicate.

That night they slowly wrestled amid the down. He whispered feathery nothings, his shoulder blades sore but his spirit light, and she responded with short sharp cries of joy, her ax still leaning in the distant kitchen. Meanwhile, the fire had burned down to a smoldering glow.

“Yes, that would be fine,” she mumbled, exhaustion pulling her down toward sleep.

The man slipped out into the icy cottage chill. Instead of placing one of the ax-cut logs on the smoldering embers, he placed her ax in the fire. Flames licked at its handle. The man slipped back into bed. The lady mumbled “Thank you,” as if from a dream.

The following morning when the lady saw the head of her ax nestled in the cold ashes of the fireplace, she grew quite hysterical, breaking several dishes and threatening to kill the man with the broken shards for what he had done. But harming him would not bring her ax back to her side. She threw herself back into bed, which still carried the scent of their lovemaking, and sobbed.

Meanwhile, the man made a breakfast of hotcakes and bacon, and a special tea that was designed to take one’s sadness and transform it into something serene. He served her breakfast in bed. The lady was still numbed by her loss but was made hungry by the mouthwatering smells of the food. As they took their first bites there came the sound of birdsong from outside.

On one of the many birdhouses a golden finch had landed. In its beak it held several pieces of straw.

The lady spoke. “My dream is while I’m sleeping someone comes and steals my ax away.”

The man bit into his bacon. “It’s not so horrible, is it?”

The lady stared at him, at his wingless back, at the fireplace and its layer of thick ash, and finally she looked outside the window at the golden finch preparing to move into its new home. She felt safe and defenseless all at the same time.

“No, it’s not so horrible, after all,” she said 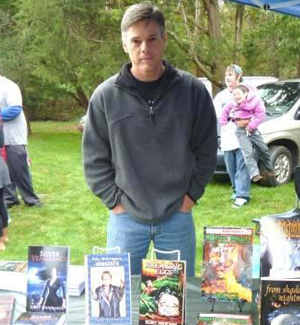 Kurt Newton was born and raised and still resides in rural Connecticut.  Over the last twenty years, his poetry and short fiction has appeared in a variety of publications, including Weird Tales, Space and Time, Dark Discoveries, Shock Totem and Polluto.