Elise has twenty-seven rules for coping with her life. She follows them as if doing so is the only thing keeping her intact.

Rule Ten is to avoid confrontations if possible. So she doesn’t turn to face the only other passenger on the bus, the one sitting behind her, staring. She knows his eyes are on her even though her back is to him.

When Elise was young, she didn’t realize her perceptions weren’t the same as everyone else’s. She believes this is partly because her abilities were weaker then and partly because small children are expected to see the world differently than adults. When a five-year-old talks about a playmate no one else can see, it’s an imaginary friend, not a manifestation of psychosis.

But time passed and she came to her first rule. Don’t talk about the people (and other beings) that you see but no one else interacts with. They aren’t always obvious, even now. The man on the street corner outside the bus window, eyes downcast, hat at his feet. Are people ignoring him because that’s what people do to beggars? Or is he not really there?

She could tell for sure if she looked in his eyes. But she won’t do that — it’s Rule Five. Though if he were other than human, she’d see nothing unusual there. It’s not the others whose eyes can be terrifying. It’s people. Rule Five was born on a middle school playground. She saw something awful in Ridley Jackson’s eyes right before he and his cronies jumped the new boy. Elise forgets the other boy’s name. His family moved in and moved away, and he’s barely a memory in her mind. But the nauseating sense of malice she saw in Ridley’s eyes will never be forgotten.

Elise had spent a brief while in her pre-teen years hoping she was “special.” She might be whisked away for adventures with a wise old wizard or a friendly giant. It didn’t take long to learn this wouldn’t happen. The list of rules grew quickly in her teenage years.

The bus stops. Two passengers get on, a young couple holding hands as they walk down the aisle. They choose the bench right in front of Elise’s. She can smell the beer on them and feel the lust pouring out of their bodies. She wishes they had picked somewhere else to sit and thinks about standing up, finding another seat. Rules Eight — don’t draw attention to yourself — and Twelve — keep your distance from people — are in conflict. She settles for shrinking back into her seat, closing her eyes, and turning up the volume on her headphones.

She hates the bus but her attempts at learning to drive were a fiasco. She remembers how proud her mother had been seeing her hold up a temporary learner’s permit. Elise had really wanted to make it work. To be normal in that way.

The couple in front of her is full on groping. They probably think she’s asleep, but Elise can sense it all. She resents their ability to live their lives with only society’s rules, not a list of personal ones. (Twenty-two is don’t drink alcohol. She tried this, thinking it might numb her senses. It made them stronger. Seventeen is don’t have sex. Tony Jackson, Ridley’s younger brother and as different from his sibling as could be, had been her first — her only — serious boyfriend. She’d even opened up to him a bit, doling out the fragments of her world that seemed least weird: knowing sometimes right before something was going to happen and “thinking” she might have seen a ghost at school. They’d gone to prom together her junior year, his sophomore year. That was their last date. Also the night Rule Seventeen was born.)

Elise hears the ding of a stop requested and one of the girls hollers for the driver to let them off.

“Can’t. Gotta wait for the next official stop,” he says.

Elise isn’t sure whether the girl actually curses the driver out or if it’s just what she’s thinking.

The next stop was only a minute off anyway. The couple gets off the bus and Elise is glad to be away from their heat. She looks out the window (just in time to see both girls flip off the bus as it pulls away) to see how close she is to her own stop.

Familiar buildings and signs, she’s almost home. Elise thinks about walking through her door, into her own space, and finally relaxing. (Unfamiliar doors, another danger in her life. Rule Nine: always touch a door, make sure it’s a real world object, before passing through it).

She reaches up to request her stop. A premonition strikes Elise and her gut clenches. She hesitates a moment, but knows she can only sense the future, not control it.

She gets off at her stop and quietly acknowledges the driver’s “Good night, miss.” She can’t hear footsteps behind her, but knows the other passenger got out the rear door and is following her.

She turns down the side street toward her apartment and hears him closing the gap.

The red door she’d seen in her premonition is right where Elise expects it to be. She knows this street, knows this door is out of place.

Elise stops and turns toward the wall. She pushes the door ajar and catches a whiff of something sour on the other side. From the corner of her eye she sees the man pause then he charges at her.

She doesn’t run but uses his momentum to fling them both through the not-there door. If it was dark on the street it’s utter blackness here. A sound of something nearby brings goosebumps to Elise’s skin.

She takes advantage of the confusion to yank away, plunge back through the door, and swing it shut. Something bumps against it and there’s frantic knocking. Then something heavier thuds against the door. Everything else is silence.

A streetlight flickers overhead. Elise looks around and sees no one else. Good.

She continues to her apartment, ready to be done with the outside world for a dozen hours until it’s time to get up and try to make it through the day again.

Elise has twenty-seven rules for coping with her life. She follows them as if doing so is the only thing keeping her intact. 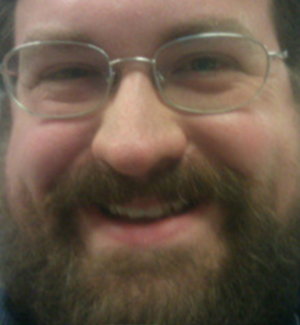 Michael Haynes lives in Ohio with his wife and children. When he’s not writing, reading, or fixing computer databases he enjoys watching movies, going to hockey games (go Jackets!), and cooking. He blogs regularly at michaelhaynes.info about writing and whatever else crosses his mind.

Elise has twenty-seven rules for coping with her life. She follows them as if doing so is the only thing keeping her intact.
Rule Ten is to avoid confrontations…

Joe fretted the hole in his jeans. The revolving doors of the skyscraper twirled and a Suit drifted to his bench. He thought Suit but she was more a girl with her hair unloosed from her bun and fingers tugging at the collar of her blouse…