Adam Israel: Half the time, I’m sitting at a coffee shop with headphones, a notebook, and an idea. My desk, where I do the hard stuff like editing by the glow of my lava lamp, is organized chaos. I’m probably wearing a toque. There’s a mug of something warm and caffeinated at hand. A shelf filled with LEGO minifigs, a vinyl Tom Baker, and young Hellboy watch over me, and a bottle of Glenlivet waits to be opened in celebration. Books, stacked in piles at my feet, overflowing the shelves behind me. Index cards with bits of dialogue and half-baked thoughts scattered across my desk.

GFG: Was there anything in particular that inspired “Aye of the Hagfish”?

AI: As with most things I write, it was influenced by several things. The spark was a call for submissions from Dagan Books, for their Fish anthology, a few years ago. Add an interest in any kind of mythology and a rewatch of Torchwood, and a story was born.

GFG: What is the weirdest thing you’ve ever found on the beach?

AI: We were taking a boat out of a lake in northern Wisconsin when I felt something squishy underfoot. I fished out a palm-sized object that had looked like a waterlogged brain with the consistency of a jellyfish. For a moment, I thought it really was something’s brain and dropped it back in the water, and have regretted not getting an identification ever since.

AI: For me, this is the year of finishing things. I have my first novel in revision, and many drafted short stories that I’d like to send into the wild. As a recent immigrant to Canada, I’m hoping to buy a cozy little house in which to write said things.
Also, new seasons of Sherlock and Orphan Black, and Peter Capaldi as Doctor Who.

AI: I’m involved with two great groups of writers, writing writerly things of interest to other writers. The Inkpunks, and BookLifeNow. You should totally check them out, after you’ve read all the stories here at Goldfish Grimm! 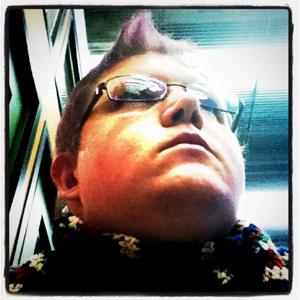 Adam Israel was born with one foot on the road and a book in his back pocket. Having lived in Chicago, New York City and Los Angeles, he’s expatriated to rural Ontario, Canada with his wife, three dogs and three cats. With his nomadic days behind him, he spends his days working freelance as a writer and software developer.
A graduate of the 2010 Clarion Writers’ Workshop, his fiction has appeared in print and pixel, most recently in Crossed Genres, Goldfish Grimm (twice) and the anthologies The Crimson Pact 2 and Finding Home: Community in Apocalyptic Worlds. He can be found online at www.adamisrael.com and on Twitter @adamisrael.