My name is Harda. I’m 7 years old and I have squirrels inside my head.

Mom says it’s just stories and that I must stop telling lies. When I tell someone about the squirrels, she gets very nervous, then smiles and apologizes. She says I’m a girl who tends to fantasize a lot. After that, she pinches my arm and stares angrily at me. But I have squirrels inside my head no matter if she likes it or not.

Sometimes I don’t like it either because the squirrels tickle me, mess up my hair, and make me do things I don’t want. My teacher says nobody can make you do anything against your will, but she doesn’t have squirrels and doesn’t understand a thing. The other day I was sent to the principal’s office because the squirrels made me stab a sharpened pencil in Monica’s hand. I explained that it wasn’t my fault but the squirrels’. Tell you a secret, though. I didn’t mind,; I’ve never liked Monica much. The principal called home. Mom was more nervous than ever, her voice quivered as she said that I was a girl to tends to fantasize a lot, that kids are kids and they fight over silly, childish things, and that she’d pay Monica’s medical bill. I was grounded for three weeks.

The squirrels are hairy and have fluffy tails. Their eyes and fangs glow in the dark and so do those nasty pimples in their backs. They have a pocket watch which I sometimes hear ticking, tick-tock-tick-tock, so loud that I can’t sleep or concentrate in Math class. The squirrels also gather nuts every day and then devour them making terrible noises.

This morning, the squirrels told me that I have to push Monica down the stairs. But I don’t want to; I know that could hurt her much more than a pencil. That’s why I told mom I wasn’t feeling well and asked her to let me stay home and rest instead of going to school. So I’m here while the squirrels wind up their watch so noisily.

I hope Alice brings my homework. I remember I became friends with her during a school’s day trip. The squirrels had made me cut her hair and put the locks between some book’s pages. She didn’t get mad at all, instead she burst out laughing when I told her it had all been the squirrels’ idea. Since then, she’s the only one who believes me. She says that she’d love to have a cat or a ferret inside her head. If not a cat or a ferret, she wants to have a goldfish inside her head, though. “But with a lawnmower instead of a watch,” she says, but she doesn’t know what she’s saying.

I stayed home today because I do know.

Mom yells from the door saying that a schoolmate came to see me and bring the Math homework, she says that my schoolmate is coming up to my room since I’m still feeling kind of sick. The schoolmate, of course, is Monica.

The squirrels know it too. 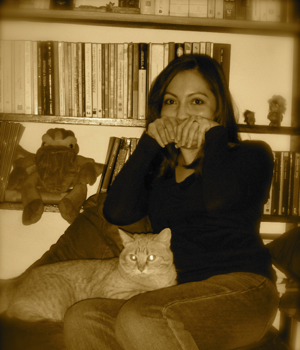 Nelly Geraldine García-Rosas is Mexican and recently moved with her fiance and three cats to Calimaya, a little town near an extinct volcano and not so far from Mexico City. She writes mostly in Spanish, but sometimes she tries to create stories with her broken/robot English in order to, maybe, take over the world. Her work has appeared in anthologies like Future Lovecraft and Mexican SF webzines like Penumbria. She can be found online at: www.nellygeraldine.com