“Do you have it?” His tattered greatcoat clashed with the refined atmosphere of the restaurant. It suited him perfectly.

I put down the menu. He had been just as brusque in his letters. I had hoped that we would be able to talk first. “Of course I have it. Would you care to sit down?”

“There is nothing to discuss.” He sat down.

“Ah, but there is, my dear sir.” I sipped my wine. “It pertains to the nature of the item.”

“Don’t worry, I won’t renege on our deal. I just have a few simple questions. Then it is all yours at the agreed price.”

“Questions weren’t in the price.” He fidgeted with the silverware, straightening and unstraightening the forks.

“Indulge me.” I smiled. “Tell me, when did this craving, this need, start?”

“You were in New York, weren’t you? Then DC, perhaps London? Surely it happened then. How did you find out how to satisfy it?”

He glared at me. “You don’t know what it’s like. What it feels like to need them. To crave them like I do. It’s fine at first, just grocery store paperbacks. After that, it’s trade paperbacks, the nice big ones with the flashy covers. Then you have to have hardcovers. After those don’t satisfy, there’s only first editions.”

“And so forth. I see.” I looked at him more closely. “You truly are suffering, aren’t you?”

“More than you know.”

“My apologies.” I took the book from the bag at my feet and handed it to him.

He unwrapped the tissue with shaking hands. Licking his lips, he caressed the leather cover. It was an eighteenth century original with Cosway-style bindings. I had paid four thousand dollars for it. Curious to see what he would do, I watched him closely.

After regarding it for a few moments, he gently opened it. He slowly tugged on the first page, carefully ripping it along the bindings. The bibliophile in me cringed.

Resting the book in his lap, he folded the page neatly into a small bundle. Then, studiously ignoring me, he stuffed it in his mouth.

The tension ebbed from his shoulders as he chewed. He swallowed, transformed into a completely different man. Gone was the haggard, starved look. Instead he smiled, complete, beatific, even. He meticulously excised another page and ate it.

I glanced out the window. It felt indecent to watch.

After he was finished, he softly closed the book. At the soft sound, I looked back to see him cradle it to his chest. A moment of silence passed while I waited for him to recover.

Finally, I cleared my throat. “I hate to be crass, but there is a small matter of payment.”

He blinked and looked up, torn from whatever reverie had gripped him. After a moment, he remembered himself and pulled a small brown paper package from the depths of his coat.

I received it with as much care as he had used to accept the book, but for a different reason entirely. It wasn’t every day that I held in my hands a package worth several thousand dollars a yard. I dealt in books and rarities, surely, but never something as valuable as this.

“It’s all there.” Before I could reply, he stood and walked away, the book hugged to his chest.

I watched him leave the restaurant with a smile on my face. He would be back.

Unable to resist, I carefully opened the top of the package and peeked inside. The bookworm silk shimmered with the memory of a thousand words. 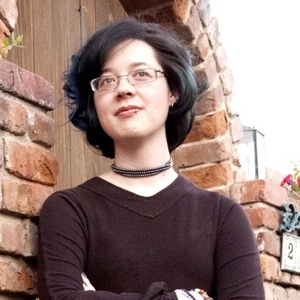 Vivian Caethe’s short stories and novellas have appeared in a variety of magazines and anthologies. Her novella, The Diamond City, is published by Bold Strokes Books. While writing, thinking and breathing in general, she drinks tea in the constant search for the perfect cup. She lives in Colorado with her husband, a dog who think he’s a human with hypertrichosis, and a supervillan cat.

“Do you have it?” His tattered greatcoat clashed with the refined atmosphere of the restaurant. It suited him perfectly.
I put down the menu. He had been just as brusque in his letters. I had hoped that we would be able to talk first. “Of course I have it…

The World Doesn’t End, Even When It Should

Yes, it was morally ambiguous. Potentially blasphemous, depending on your religious affiliation (although what was Lazarus, really, if not a zombie?) and, of course, highly illegal…