Goldfish Grimm: Michelle Ann King is a returning author to Goldfish Grimm. Her story The Portal to a Lost World originally appeared in issue 12. While it’s only been a few months, what sort of interesting things have changed or happened in your world since we last saw you in Goldfish Grimm?

Michelle Ann King:  I’ve fallen in love with Twitter, which I think is a wonderful writers’ equivalent of being able to turn to someone at the next desk and say, ‘Oh, I just thought of something funny/interesting/useful…’ I have some wonderful Twitter buddies, and it’s great to hear about their successes and sales, too (and that’s also a nifty way to find new markets!) I think if most of the people you interact with on a daily basis are in your own head, it’s a good thing to be able to branch out and talk to some real people every now and then.

GFG: Was there anything in particular that inspired “The World Doesn’t End, Even When it Should”?

MAK:  Generally, my deep and abiding love for zombie stories. I wanted to write one with a different slant, and it started me wondering what it would be like if instead of killing people, the zombies saved them. I decided there’d probably be the normal mix of reactions – some people would embrace it, some would be horrified by it and others would find a way to make money out of it.

GFG: Your character makes a good argument for using zombies for healing but I can also see how it could really make one squeamish. If this were real, would you be able to go through with having a zombie heal you?

MAK:  One thing I always wanted to do with the story was keep the details of exactly what the process entails offscreen–sometimes, the most effective thing way to freak a reader out is leave them to fill in the blanks themselves. So on the basis that I am horribly squeamish, I’m not sure. On the other hand, the survival instinct will beat down most objections in the end–so if it came down to zombie-up or check out, I think I’d go for it. And at least they purr. Anything that purrs has to be cute, right?

MAK:  With the way the weather in the UK has been lately, the first thing that comes to mind is SUMMER. I also have some great trips coming up, to Las Vegas and Hawaii, then later to Edinburgh and Cornwall. But really, I find that since I am currently fortunate enough to be able you write full time, working days and holidays are almost equally joyful.

MAK:  I have a story in the absolutely wonderful Unidentified Funny Objects 2, which I would thoroughly recommend to anyone who likes some humorous SFF. The story from Jim C. Hines (Stranger vs. the Malevolent Malignancy) is one of my favourites of all time. I also have two collections of my own stories so far (Volume 3 is due for release in April) and details can be found here. 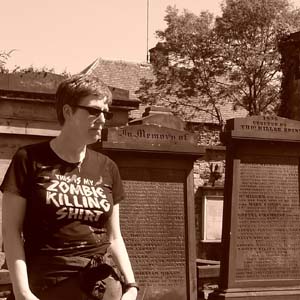 The World Doesn’t End, Even When It Should

Yes, it was morally ambiguous. Potentially blasphemous, depending on your religious affiliation (although what was Lazarus, really, if not a zombie?) and, of course, highly illegal…

“Do you have it?” His tattered greatcoat clashed with the refined atmosphere of the restaurant. It suited him perfectly.
I put down the menu. He had been just as brusque in his letters. I had hoped that we would be able to talk first. “Of course I have it…