Goldfish Grimm: Jaym Gates is a returning author to Goldfish Grimm. Her story Clank-Clank Nanny originally appeared in issue 2. Jaym, what sort of interesting things have changed or happened in your world since we last saw you in Goldfish Grimm?

Jaym Gates: Well, I’ve turned in two big editing projects, War Stories and the SFWA Bulletin, so that’s kept me busy. I’ve also sold a bunch of stuff in the last year, and attended a bunch of cons, and started new projects to improve SFWA, and…~runs out of breath~ So, you know. Just things.

GFG: Was there anything in particular that inspired “When Nothing Was, and Everything Is”?

JG: It’s directly inspired by a favorite movie, Dragon Hunters, an animated French film. There’s this amazing scene where one of the main characters is sitting on a piece of debris, feeling sorry for himself, while the ruins of a city explode behind him, but it’s all floating in the air, and the music is this soft, haunting background. I get chills every time I watch that.

GFG: Your story went through a fairly significant revision. Can you tell us about that process?

JG: Well, while it was inspired by the above scene, when I got the edits back, I realized that I hadn’t figured out what the character was inspired by. It was still too much a scene, not a story. So I muddled around for a bit, and suddenly realized that it was like the character’s world was being pulled into a black hole. She wouldn’t know what was on the other side, so it would seem like death, likely after the death of her whole civilization.
And from there, it developed this deeper meaning, and the writing took on shades of the struggle with fading memories, PTSD, and the like. So the rewrite was absolutely necessary, and took the story into an entirely different place.

GFG: Music or no music when you write?

JG: Absolutely music. The mood varies, but I do my best work when I get into this sort of manic trance. It’s a really weird, emotionally-volatile place. I struggled with manic depressive episodes for a few years, and when I’m writing something like this, it’s like one of those episodes. Everything fades into a tunnel vision, and I’m just writing like mad. So trancy, intense music like IAMX, Ladytron, Tiziano Ferro, that’s the kind of stuff I do well with.

JG: War Stories will be available soon, and my fiction can be found in Triumph Over Tragedy, By Faerie Light, and Writers for Relief. 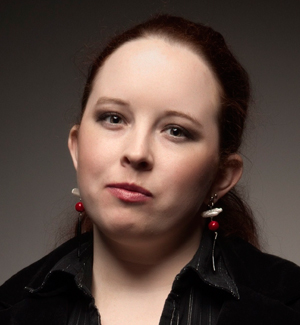 Jaym Gates is the Communications Director for the Science Fiction and Fantasy Writers of America. She has edited the anthologies Rigor Amortis, Broken Time Blues, with Erika Holt, and War Stories, with Andrew Liptak. Her work can also be found in Aether Age, Triumph Over Tragedy, Kaiju Rising, and By Faerie Light. You can find her on Twitter as @JaymGates.

When Nothing Was, and Everything Is

I sit at the end of the world and try to paint a bridge from everything to nothing, and I can’t do it. The stars are falling into my hands, mingling with my tears. They stain my fingers, a fantastic palette of wishes and dreams. I dabble with them, drawing their hopes and memories…

The Secret Language of Thieves

The marks they leave are found in apartment buildings, under old staircases, on wood railings or cellar doors, sometimes even inside elevators. Scratch-like, just a line or two with a kind of odd flourish, as if engraved with a crooked hook…