Giovanni De Feo: I have two kinds of ‘offices’. One is the jotting-down-ideas-on-a-notebook kind, which is the one I prefer, because I actually pay attention to where I am. Here mood and texture rule. For example, in Amsterdam my favorite spot was a place called Latei which was at the same time a second hand retail shop and coffee place. With dozens, maybe hundreds of lamps hanging from the ceiling. Fantastic. I wrote on a 70s orange couch, something that might have been taken from Clockwork Orange’s set, a couch which would be literally sold while I was writing and nimbly removed under my ass. In fact that happened a couple of times.
The second type of office is my couch at home. Over my head there is a plethora of masks. I am not sure whether it’s some kind of tribal need, maybe a shamanic memory, or just a taste for the theatrical, but it does work fine when I am ‘writing-writing’. I don’t notice much my environment then, but it’s good they watch over me anyway.

GFG: Was there anything in particular that inspired ” The Secret Language of Thieves”?

GDF: No, it actually came just out of the blue, fully formed. Maybe in the back of my mind were the small adhesive signs postmen left (in my old neighborhood in Rome) on the street corners, something that always intrigued me, like a mysterious sign system no one could figure out.
More unsettling is the fact that strange signs appeared on the elevator stone frame of my building AFTER I wrote this story. They look pretty much like I envisioned them, though somehow vertical. Does it mean they actually read the story? Did it please them? I wonder. I must say that now, every time I step out of the elevator, I try to see if there has been a change in the pattern (and what can that new line possibly means?)

GFG: What’s the most interesting thing you’ve had stolen from you?

GDF: Mmm, that’s a tough one. I guess nothing so important if I can remember it. But I do remember when we were burglarized at our seaside resort, in a town close to Naples. I recollect very sharply the feeling of… defilement. Every object looked at us in a different light, like they had been changed by thieves’ hands. Only we won’t notice the difference until it would be too late.

GFG: Music or no music when you write?

GDF: I am becoming more addicted to electronic music, and sometimes celtic. The ideal state though is when words create their own music. In that state it is impossible to hear anything else, really.

GFG: Did you write the story originally in English? If so, did that pose any challenges to you and, if not, what the process of translating it was like?

GDF: I wrote it in English, though I had an American friend helping me with any ‘italianism’ I might have left behind. It is an experiment I am currently entertaining, writing in a language that is not my own. Tough, I must say, because really there are concepts that are not translatable from a culture to another. For example writing this story I came across the word condominium, which is also a Ballard’s novel title, so it does exist in English, but it doesn’t convey the same feeling as in my culture. The most deceiving are the ‘close friends’, the word-images that look the same, and yet they really are not. Anyway, the experiment has been a very interesting one for me as it entertains the question: what is left of a story when you strip it of the language it was thought in?
My answer is: images. Images are the pre-words stuff stories are made of. Even though that is not totally correct, for the images we have depend, and are influenced by, our language… 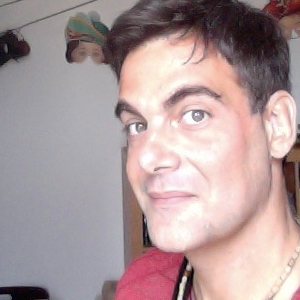 Giovanni De Feo is a storyteller and teacher who has lived and worked in the Netherlands and in the United Kingdom for several years. He is published author of speculative fiction and a screenwriter. He has no dog, no cats, no spouse, nor any circus fleas, but he is very keen on collecting masks on his living room wall. He doesn’t find their constant whispering unsettling at all, though others occasionally do. He lives and works in Genoa.

The Secret Language of Thieves

The marks they leave are found in apartment buildings, under old staircases, on wood railings or cellar doors, sometimes even inside elevators. Scratch-like, just a line or two with a kind of odd flourish, as if engraved with a crooked hook…

When Nothing Was, and Everything Is

I sit at the end of the world and try to paint a bridge from everything to nothing, and I can’t do it. The stars are falling into my hands, mingling with my tears. They stain my fingers, a fantastic palette of wishes and dreams. I dabble with them, drawing their hopes and memories…