Cameron Huntley: Despair, mostly. I’ll usually sit down with an idea, write a couple of pages. Get nowhere. Think I’m the worst writer ever. Futz about online or do just about anything else. Get nothing done for a bit. Try again a few days later with a different tack. Get nowhere. Think I’m the worst writer ever. So on and so on, until finally I’ll hit upon an idea about how to do that story that “breaks the dam.” After that happens, I can usually get an entire story down in two days or so.
This one [20 Aspects] is actually kind of noteworthy because that didn’t happen. It was pretty simple from start to finish; every place where I had to make a decision, the choice was obvious. I think I got the entire first draft of this story down in a couple of hours, and it really didn’t change all that much.

GFG: Was there anything in particular that inspired “Twenty Aspects of Exhumation”?

CH: A few months ago I was sitting on a porch swing watching the world go by and thinking about Ron Rash’s “One Foot in Eden,” which I had read a long time ago. Why I was thinking about this particular book, I don’t know, but there’s a scene where the flood this area to create a reservoir, and a bunch of coffins are unearthed and float to the top. There was just something so profane and disrespectful about it that it struck me.
I combined this with the fact that cremation’s becoming more and more popular with countries that have traditionally buried their dead, and I thought, what if that wasn’t the case? What if we kept burying people until we ran out of room to bury them? What if we reached a point where we had to till a graveyard just to make farmland? What if there were people who had to go around exhuming graves so that humanity or whatever could simply survive? The germ of the story came from that idea; the rest came later. A solitary man seemed more mysterious, a world that’s familiar but whose familiarity makes its strangeness all the more alien–these came about after working the idea of these gravediggers over in my head.

GFG: There seems to be a lot of symbolism surrounding the exhumation of graves, the exhumer, and the exhumation process — were there things about that which you were especially hoping readers would discover?

CH: Not necessarily “discover,” but more feel. Ideally, the story has an underlying sense of dread and foreboding that manifests and communicates to the reader in different ways.
Hemingway had his iceberg theory, and I’ve always like that idea. I like when a lot of the story isn’t in the story. If you play it right, you can set the reader to spiraling off into all sorts of directions entirely on their own. Whether this story is successful or not, I don’t know–but there are a lot of questions, I think, and I want the lack of answer to not be confusing, but invigorating, which is a tough line to toe.
For example, who are these people? What happened to the “ones that came before?” Are the graves just graves of the intervening millennia? Or are many of them recent, from a calamity that befell this old society? Did this calamity cause some of them to become invested with a spiritual power? Is this spiritual power good, evil, neither? Why just one person? Why does that person not have wings…when apparently he or she did have them previously?
You could come up with a million answers to these, and any one of them could be right. Maintaining a narrative coherence while doing this is a particular challenge. I hope I pulled it off.

GFG: Fall is coming in just a few days. What’s your favorite part of this upcoming time of the year?

CH: I live in Appalachia, so we’re getting close to the trees starting to look like ethereal scoops of ice cream; it’s a huge tourist industry here, and it’s totally worth it, especially if you can get a good view.
Also, the temperature. There’s a sweet spot in fall that doesn’t last very long, where the temperature is cold…but not too cold. High fifties, low sixties, and the wind is brisk, even with the sun out. It’s just heavenly. Unfortunately it lasts all of three weeks.

CH: To promote, not at this moment. Perhaps in a few years. It’s a tough business to kind of break into, and I’m just getting started. If anybody is interested and liked the story (or, you know, hated it, whatever) you can find me on Twitter at @cameronhuntley1. 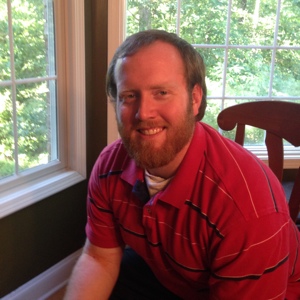 Cameron Huntley is a freelance journalist in Asheville, North Carolina in a time when newspapers are shutting down all over the country and the vocation has never been less respected. Yay for him. When he’s not chasing down real stories, he’s writing slightly less real ones. This is his third published fiction.