Alex Livingston: I write on a laptop at a desk facing the wall in a quiet room in my home. The keyboard is missing a few keys after an ill-advised moment of leaving my dog alone, so there’s a USB keyboard on top of the laptop. I’m also fairly convinced the old thing is going to light on fire if I don’t keep its fan vents free, so I usually put a thin notebook under the whole shebang. I keep some notecards and such on the bulletin board in front of me, along with a rectangle of tin embossed with a human leg.

GFG: Was there anything in particular that inspired “Value and Saturation”?

AL: The names of paint colors feel like an arcane language, don’t they? Some mysterious cryptography of color and reference, only fully understood by the initiated. We have to assume that somewhere a group of hooded secret-society types determines what Pantone’s color of the year is going to be. The entirety of the future of humankind has been mapped out in the swatches which ring their candle-lit council chambers.

AL: When I became the age at which it first becomes socially expected to have a favorite color, let’s say around five years old, I made a snap decision that I liked green the best, since that was the color of the cartoony monster depicted on the sticker on my lunch box. I’ve done my best to stay faithful.

I detest the particular blue of Tiffany & Co. boxes. I have no issue with the company, their products, or anyone who purchases them. I just hate that shocking aquamarine.

GFG: Have any plans for Halloween?

AL: I plan on putting way too much work into a costume to just hand out candy, and then handing out candy.

AL: If you’re into 80’s hackers, punk mages, and fey magic, you might like The Annwn Simulation 1985, an interactive fiction project. 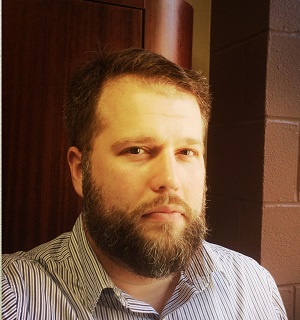 Alex Livingston grew up in various quiet New England towns before moving to Buffalo, NY to study English at Canisius College. His fiction has appeared in Daily Science Fiction, Bastion, and Quantum Fairy Tales, and his first professionally published novel is scheduled out this year with Harlequin Digital. He is married and lives in an old house with his brilliant wife and a pile of aged videogame systems.