R. M. Graves: I can be found writing at all the above, thanks to the cloud, where my life is gradually being decanted. Percolated. I walk a couple of hours a day and that’s when all the ideas come and are pondered and re-pondered. I write predominantly flash so once I get an idea and it stands up to the inner-bully (‘Mate, you got no shame?’) I can normally get it down in one piece. Then I re-write, upload it to the fantastic Online Writing Workshop, listen to the great critters there, and re-write once more, stealing all their good ideas.

GFG: Was there anything in particular that inspired “Decanting George”?

RMG: My wife and I are middle aged. Losing loved-ones and worrying about those who are left is the worst part of this time of life. Witnessing someone you love and respect unravel is as horrible; it’s a profound waste to lose a life-time’s experience. What would be wrong in keeping it somehow? Uploaded human consciousness needn’t be all ‘Lawnmower Man’. But at the same time this seems a terrible and shallow solution. To create a simulation of someone you love. That’s where I wanted the story to be; in this bit of doubt.

GFG: Often times when a loved one is sick we are forced to make choices for them. In this case to do you think the choice the family made was a good or bad one?

RMG: We are George’s generation. From our point of view, where life is analogue and has a kind of precious mysticism about it, the choice the family (our children) has made is a bad decision. It misses the point of life. It’s creepy.

But I wonder if our kids, having grown up with smartphones and Wikipedia and social networking, will have the same clear-cut definition between real and virtual, or life and object. For them it’s a good decision. For them it’s kind of heaven.

GFG: Do you think the technology of uploading people into artificial bodies will develop in your lifetime? If it did, would you want to consider it for yourself?

RMG: Kurzweil puts it at 2030 or 2040, suits me fine. Though the English cynic in me expects uploading to be another one of those ideas — like robotics and living on the moon — that is rather more complicated than we thought.

If I did contemplate uploading it could only be for my kids. It would be great if our consciousness was like some ghost organ you could transplant. But it isn’t. Only the uploaded part of me would have any awareness of its immortality. The wrinkled me will die. I can’t help but hope that my kids will be strong enough to just accept the loss. I can’t bear the thought of their grief, but even that is part of their growing-up in their own middle-ages. Still, it will be their choice.

Transplanting the entire central nervous-system though? That would be a different matter. Gimme.

RMG: My artwork: “Postcards From The Future” (.co.uk), and follow me @DreamBuffet. 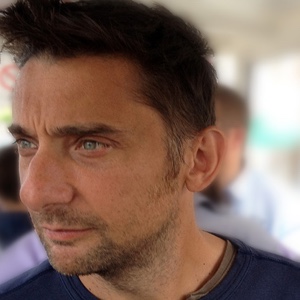 RM Graves is an illustrator and writer based in London. His art-book “Postcards From The Future” is available on Amazon and his fiction appears in Interzone, Escape Pod, Stupefying Stories, Flash Fiction Online, Every Day Fiction and Voluted Tales. He drives a Honda and thinks this is cool