His mother’s new boyfriend was The Bull. He had a neck like a log and he bellowed when he slept.

The last one had been The Lizard, with his flaky cereal skin and the way he sat on the sofa like it was red hot sand, always looking like he was ready to scurry off somewhere. Jack’s mother had blamed him for that; said that he’d made The Lizard feel nervous. But she’d said that about The Shark, too.

The Shark, with his dead eyes and his pointed teeth; the way he’d tell Jack that he was there if he needed to talk, “man-to-man”. Jack had hated him too. But none of them had lasted long.

The Bull was always trying to trick Jack into being his friend. Football matches, fishing expeditions, trips to the woods where he’d wobble across rope-bridges and awkwardly crawl under camouflage nets, trying to get Jack to join in.

Jack always refused. He wasn’t stupid. The Bull was an enemy. He knew that if he didn’t watch the gate, then The Bull would break through and trample him into the mud.

The noises woke Jack, the banging and the bed springs jangling and those weird sobbing sounds his mother made that turned his stomach. Then the snoring.

He jolted upright, and fumbled under his pillow for his t-shirt. It was his dad’s; the only thing that Jack owned of his. His dad was a rat, or a chicken, according to his mother, but Jack didn’t care.

He flicked it out, like a matador’s cape, and waited for his shadows to come.

As the snores got louder, the darkness took form.

Jack closed his eyes, and felt his anger grow; felt it become as heavy as a huge black bowling ball in the pit of his stomach. From the circle, a tail swished free; and as Jack concentrated, the shadows collected together into sharp points for horns; into heavy clumps for hooves.

Jack stood on his bed, saw his rage reflected on his white walls; stared into its merciless eyes. Then he smiled, and slowly, he waved the rag.

He lunged as the beast charged him; cheered as it crashed into the wall; wiped imaginary sweat from his brow as it ricocheted back into the folds of his duvet, dazed.

But Jack wasn’t finished. He twirled around as it ambled upright, waiting for that crucial moment, holding–

“What are you doing Jack? It’s the middle of the night!” His mother, standing in the doorway, the light making the shadows split and scurry away into the corners like cockroaches. “Are we going to have all this, again? Don’t you want me to be happy? What’s wrong with you?”

He didn’t answer. He knew that he was a snake, or a bug, something worse; something slimy, and mean; something beyond words. But he wouldn’t be, if it wasn’t for The Bull. This was all his fault.

Every night, Jack conjured up the shadows. They grew; bigger and bigger, and more and more restless, stomping on the floorboards and bucking under the blankets, wanting out. Jack stroked the muzzle of his beast, and whispered to it as it cowered as his feet. No, not yet.

The Bull stood at the side of the swimming pool, his big belly protruding over the waistband of his shorts. The sight of his exposed, pale flesh made Jack feel sick, and he dived in, quickly moving away from him underwater.

Jack liked the sense of slow-motion beneath the surface; that feeling of being apart from the world. All was hazy; the laughter and the shrieks of the children were muffled, the white tiles a blur, the limbs kicking and splashing just smudges on the perfect sheet of blue.

He felt peaceful, how he used to feel at home when he was happy, when there was only him and his mother. He resurfaced only to breathe, and as he swam, back and forth, back and forth, one thought powered his every stroke: soon.

They were heading back to the car, and it had started to rain. The Bull was dashing across the forecourt, telling Jack to hurry up, but Jack stood still, feeling the droplets on his skin like a blessing.

He remembered how he’d scared the others; remembered the tiny black geckos racing across the tarmac, in their thousands, transparent but for their teeth, running up the legs of The Lizard as he squealed and twisted and tried to swat them away,as if they were wasps, stinging him all over.

He remembered the ragged dorsal fin moving across the top of the sofa, the shouts and the spilled tea as The Shark crawled across the floor, holding his legs with his eyes wide, looking for what had bitten him.

The bushes rustled as his creature took form. The grey clouds were turning black. “Come on, son, you’re getting drenched!” The Bull called.

Only his mother could call him that. At the thought of her, Jack shook his head and the thundering subsided. He remembered her in the mornings after his dad left, staring out of the window, red-eyed and telling him that she had something in them, blaming the onions that sat on the vegetable rack, uncut.

He remembered how strange it was to hear her laughter float up the stairway, how he hadn’t noticed that it was gone until he heard it again, fluttering from the cosy lounge where she sat with The Bull’s big arm around her shoulder.

Maybe she was right. Maybe they both were. Maybe there was something wrong with him.

Married. That’s what she said. The Bull had grown-up children somewhere else in the country. They were going to be one big happy family.

The rafters splintered as the beast kicked against them. Inside Jack’s skull, a spark, a kindling from horn on floor, then red, a bellow breaking from his chest as the hooves battered his heart.

The Bull took Jack to buy a suit. Jack stood limply as The Bull felt under his arms, made him stand with his arms held over his head, then tugged at the cuffs like he was trying to pull Jack’s arm from his sockets.

“Well, you scrub up well,” The Bull said, looking like a proud parent, reaching forward to ruffle Jack’s hair. Jack didn’t even pull away.

Jack got dressed as The Bull spoke to the tailor. He tied his shoelaces and peered through the gap in the changing room door and out through the window.

Outside it was sunny, but there was a shadow on the pavement, one that was moving, pacing, waiting.

They left the shop. A teenage girl and a small child walked past, both eating ice-creams, their eyes half-closed with pleasure.

“Fancy one, Jack?” The Bull asked, moving towards the small shop on the corner.

As The Bull turned his back, Jack clicked his fingers and the shadows ran right towards their target. An echo of hooves and a grunt as The Bull cried out, as if punched in the stomach. He clutched at his sides and lurched forward, confused, dropping his car keys onto the floor, one hand groping out for Jack for help, sheer terror in his eyes.

Jack saw this, and he smiled. He should call if off now, like he had with the others; he already knew The Bull wouldn’t come around anymore, wouldn’t dare. But would there be more? He couldn’t risk it. People were starting to gather, to run over, to offer help. He had to be quick.

“Jack?” The Bull wheezed, and Jack nodded, but not at him.

He commanded the shadows as they gored The Bull. They tossed him up into the air, stamped on him, played with him until he lay twisted, lifeless on the floor.

A heart attack, they said.

Jack’s mother’s fingers dug into his shoulder as they lowered the coffin into the ground. He reached up and wrapped his hand around them. He gave her tissues, made her sugary tea and weak coffee; helped her carry the platters of sandwiches and sausage rolls to the wake. He stood washing up afterwards and watched his mother out of the window.

She was with her old friend, Tom, smoking for the first time in years, leaning in as he lit her cigarette. She let him put his arm around her. A glass shattered in the suds and shadows began to amble and hop like fat toads across the patio, their long, sticky tongues lashing forward.

Tom twitched and knelt down to scratch his ankle. Jack smiled. He could bide his time.

He dried the dishes, placed the cups back into the cupboard, and separated the cutlery into neat, orderly lines. Perfect, just like his mother liked. 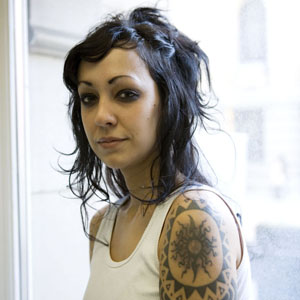 Nicola Belte lives in Birmingham, U.K, and is a part-time barmaid, part time MA student, and an in-between time writer of weird fiction. Her work has been published by Flash Fiction Online, Spilling Ink Review and The Lovecraft Ezine, amongst others, all of which you can find at her blog, here: www.nicolabelte.blogspot.com