S.R. Mastrantone: If you looked once, you’d see a bloke with bad posture hunched over a keyboard, coffee in hand, mostly staring into space. You’d think: this is dull, why did Simon invite us over to watch him write? If you looked in over the course of a few days, however, you might suspect I was having a breakdown as I only seem to listen to one CD on repeat.
I’m fine though, so don’t worry. It’s just that through some quirk of auditory genetics, music distracts me from writing. The exception is the mighty Blue Oyster Cult.

SRM: I agree with those who say you can’t always rely on inspiration to be punctual but at the same time I’m convinced the best art evolves from those big eureka! moments. I tend to stockpile ideas because they all come at the same time in between long dry spells. My writing week starts by consulting a big list of potential stories and seeing if anything still grabs me.

GFG: Was there anything in particular that inspired “The Thing That Captured Fenella”?

SRM: The charity Read International ran a short story contest with a theme “The Power of Books” which is where the original Fenella idea came from. I submitted a version of the story to that competition but then the competition never happened; it just vanished from their website and was never spoken of again. Very mysterious. I can’t help feel that the creature was somehow involved…

GFG: We loved how Fenella wound up reading the exact same books in the creature’s tower that Ellen had in her collection. This plays as nice foreshadowing to the real intent of the creature revealed at the end. What of the crops, though? What “fruit” is the creature actually tending?

SRM: I have a soft spot for the creature; it is quite a sad beast and a bit of a bumbler. When I started the story I thought it might want to eat Fenella, but I soon came to understand that it was actually a vegetarian. Sadly, the particular fruit that the creature needs doesn’t grow without a special kind of fertiliser. And as everyone knows, there is nothing more fertile that the mind of a literate youngster.

SRM: I have a blog: thewrittenabsurd.blogspot.co.uk where I write about writing and other things. 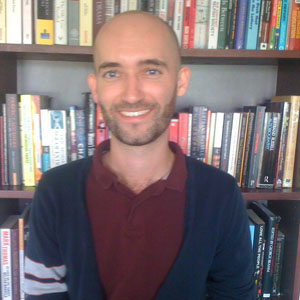 S.R. Mastrantone is a writer and musician from Oxford in the United Kingdom. He likes airports, anthropomorphism and alliteration. You can read his blog here