Sandra M. Odell: A bottle of water, the occasional snack, headphones, and Gregorian chants for a pleasant white noise. I sink myself into my music until only my nose is above the melody, and then begin to write.

SMO: Blind panic, beating back the voices in my head that say I can’t write, and occasional bursts of splendiforous goodly wordage.

GFG: Was there anything in particular that inspired “Dining With Salmoxis”?

SMO: I struggle with depression, some days more than others. In one of my darker moments, I looked into the shadows and found this idea staring back at me, the thought of legalized suicide for those willing to face their greatest fears.

GFG: Enlighten our readers about Salmoxis (or Zalmoxis). Who was he and how does he relate to this tale?

SMO: I first learned of Salmoxis in THE CARTOON HISTORY OF THE UNIVERSE by Larry Gonick.
According to Herodotus, around 520 BCE Salmoxis was a slave owned by Pythagoras, and later given his freedom. He eventually gathered great wealth and returned home to Thrace where he shared his love of gourmand eating, and his philosophies on the banquet of the afterlife. Afterwards, he is rumored to have hidden himself away in an underground bunker for three years, and was hailed as a god “having feasted at death’s table”.

SMO: Check out my blog at Sandramodell.com for reviews of audio fiction, reviews of my work, and thoughts on life and the meaning of chocolate.
My genre short story collection THE TWELVE WAYS OF CHRISTMAS is available from Hydra House Books: hydrahousebooks.com 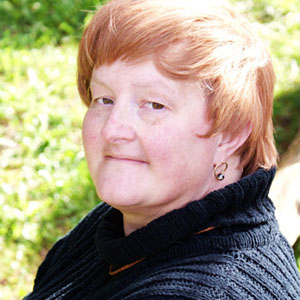 Growing up, I looked at the ordinary from odd angles that never failed to encourage the sweetest of questions “Why?”, followed closely by “What next?” Writing has been described as a holy chore, a means of communicating the unknowable, and the tempest in history’s teapot. For myself, writing is as necessary as breathing, love, or a stash of really good chocolate. When I forget that inalienable truth, I flounder; when I embrace it, I am multitude. It’s easy to see the multitude when I embrace the chocolate, but you get the idea.